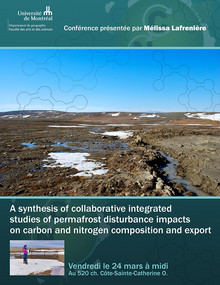 Climate change has a direct impact on both on permafrost stability and hydrology. The disturbance of permafrost (both thermal and physical) and changing hydrological regimes will substantially alter the sources, transport, and biogeochemical cycling of carbon (C) and nitrogen (N) in arctic watersheds, which stand to impact the ecological function of downstream freshwater and marine ecosystems. This seminar will present a synthesis of the collaborative and integrated research at the Cape Bounty Arctic Watershed Observatory (CBAWO), Melville Island, NU, that has been investigating the response of organic matter and N dynamics in headwater permafrost watersheds to disturbance that occurred in response to extreme warming and heavy rainfall in the summer of 2007.  Through a number of collaborative studies involving the use of spectroscopic and isotope techniques we have been examining changes in the composition, source, and age of both dissolved (DOM) and soil organic matter (SOM) and the composition and source of dissolved nitrogen, at different catchment scales and temporal resolution.  Results from these studies indicate that physical disturbance of permafrost leads to the enhanced export of dissolved inorganic N (DIN) as well as older, fresher, and likely more labile organic SOM and DOM. The multi-year studies also highlight the significance of rainfall as a driver of export of inorganic N and fresh organic matter.  Furthermore, our observations illustrate that these impacts are evident for several years post-disturbance.  As organic matter decomposition is often N limited, the combined increase in nutrient and labile carbon export suggests that disturbances may strengthen the permafrost C feedback on climate change. Together these provide important seasonal and multi-year data that can form the basis for modeling the response of C and N cycles to permafrost and climate change in the region.